History of the Rose

Home > Roses is Art > History of the Rose

The colorful and long history of the rose, the worlds most famous flower can't be explained fully on a single web page, but I'll have a go to give you some of the highlights.

Being 35 million years old as evidenced by fossil history, to todays 30,000 plus varieties leaves us with the most complicated family tree of any known flower species.  Man, that's saying a lot!  No wonder there is so much history and myth surrounding these beauties. 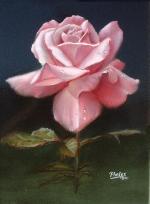 We believe their cultivation started 5000 years ago in Asia. So since that time, we've got a boat load of stories to tell.

The earliest paintings are found in Frescoes which date to around 1700 BC.  These are 5 petaled pink blooms. Within Egyptian tombs we have found them as part of the wreaths.  The oldest preserved record of a rose species still living dates back to 170 AD from within the tomb of King Hawara.

The earliest documented evidence is found in Book 23 of Homer’s epic "The Iliad", which was composed sometime in the 9th century BC. The story is about the downfall of the city of Troy. It tells that Achilles, who killed Hector, son of the King carried a shield decorated with roses and it also tells us that Hector’s body was anointed with rose oil before being embalmed by the Goddess Aphrodite, to whom the rose is dedicated.

According to mythology it was Aphrodite that caused roses be red. Upon seeing her true love Adonis mortally wounded she ran to him and in her haste scratched herself on the thorns of some roses, as her blood fell on the mythical white blooms they became stained, ever more to remain red.

This is where we get the lover's token within the Red rose.

More history of the rose. 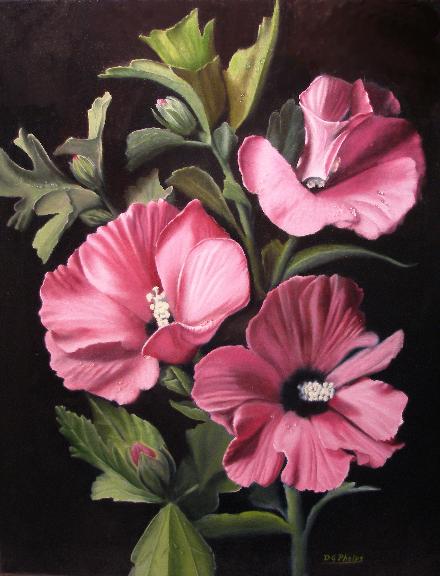 Roses were used in Roman houses for table decorations.  Guests were showered in fragrant rose petals, in the belief that the rose was both an aphrodisiac and an antidote to combat drunkenness. The Romans also began the custom of planting a red rose on a dead lover's grave and a white rose on the grave of a young woman (to demonstrate purity).


Christian History of the Rose.

The history of the rose also takes us through religious history also. Most religions believe in rose symbolism in some form or other, in Christianity the rose is associated with Mary.

White roses are attributed to the Virgin martyrs and to the Virgin Mary herself and red roses represent the blood of Christ spilt on the cross and his love for mankind. 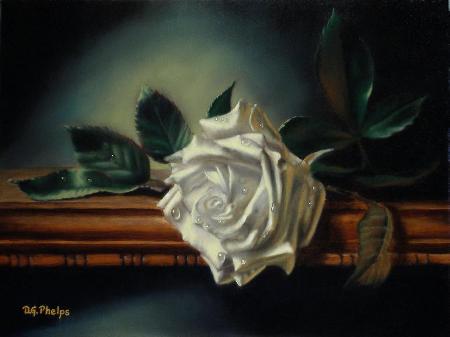 The single five petaled rose was the inspiration behind the symbol of the medieval Hermetics and was also considered to be the five wounds of Christ and his crown of thorns made from the wild briar.

The ancient organization the Rosicrucians used roses symbolically also as did other orders of Knights and sects. Rose windows can be found in churches and other religious windows the world over and the Rosary was originally a string of 150 dried roses.

During the 15th Century, the factions fighting for the control of England used them a battle symbols, thus the conflicts name, War of the Roses.

17th century roses were in such high demand they were considered as legal tender.  Napoleon's wife Josephine loved them so much a collection was established at the Chateau de Malmaison.  Over 250 rose varieties were found there and Pierre Joseph Redoute's work as a botanical illustrator completed his "Les Rose" watercolor's which is considered one of the finest records in botanical illustration ever done.

Early roses bloomed only once a year, so when the Chinese presented repeat bloomers during the late 18th century, they were a natural hit!  Hybridizers went to work from this point on developing various colors and bloom sizes.

It is here that most experts divide all roses.  The old rose group (prior to 18th century cultivation) and modern roses (those cultivated from the 18th century to modern times).

Old roses have been usually shades of pink or white.  The reds came from China!  Yellow's were discovered by accident. (Though the fellow was attempting to mutate them, he found this naturally mutated one in another field with common flowers).  Our yellows and orange ones come from this discovery. 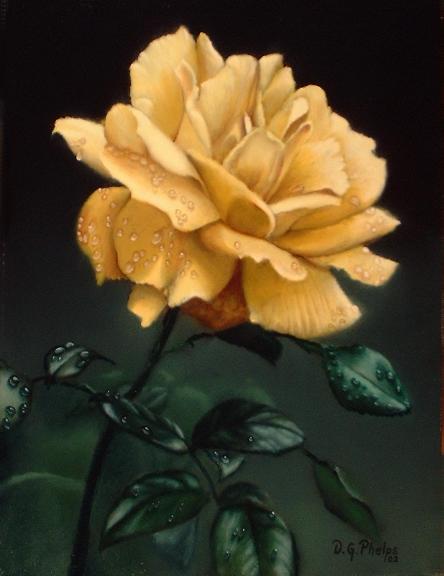 Blue and Black haven't made it yet, but there is a Red that is so deeply red, under normal lighting conditions it appears black.  Only special cultivars possess it as it is a very fragile plant.

Interested in a rose painting for yourself or a friend?  Click here so see what I have available, you may be pleasantly surprized.

Click here to head back to the top of my History of the Rose page.