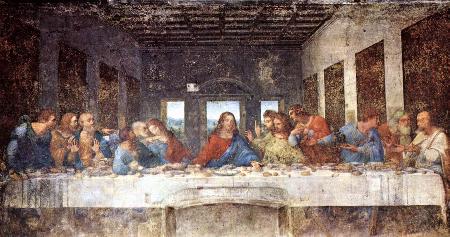 In this installment of Leonardo Da Vinci The Last Supper part 3 you'll discover the real code behind this painting! Well, let's start deciphering. And of course when we are finished with this article, I'll surprise you with the most intriguing secret yet!

"The Last Supper" is a 15th century mural painting in Milan done by Leonardo for the Duke Ludovico Sforza and his duchess Beatrice d’Este.

It is a scene that represents the final days of Jesus as narrated in the Gospel of John 13:21, when Jesus announces a betrayal by one of the twelve.

The painting measures 460 × 880 centimeters (15 feet × 29 ft) and covers the back wall of the dining hall at Santa Maria delle Grazie in Milan, Italy. This is a normal theme for refectories, (dining hall in a monastery) but in this particular example, Leonardo pulls out all the stops to push the envelope of realism and depth.

The below painting is a copy and is shown for better clarity as the original is in such sad shape. 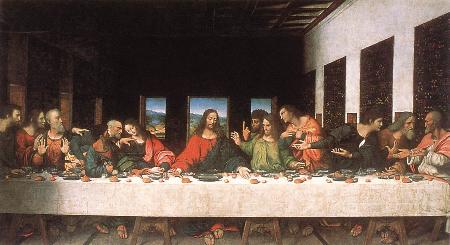 The painting is ripe with the reactions of each of the Apostles to the news and from left to right explained:

• Bartholomew, James, son of Alphaeus, and Andrew are all surprised. They also form a group of three, I’ll tell you about that significance in a moment. 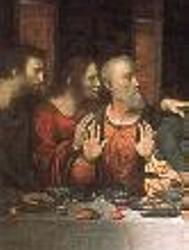 • Juda Iscariot, Peter and John (another grouping of three) each have their own story. Judas, is withdrawn and taken aback. He clutches a small bag and this is believed to be normal as he was treasurer of the group. It also signifies his blood money. Peter looks angry and clutches a knife to defend Jesus. And the youngest apostle, John, just flat out faints. 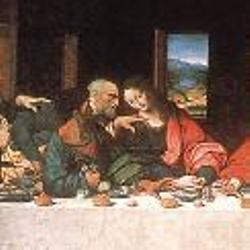 Back to the top of Leonardo Da Vinci The Last Supper

Jesus, the center of "The Last Supper" 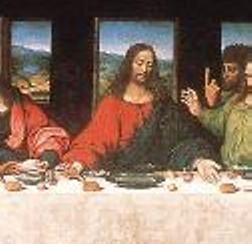 • Thomas, James the Greater, and Philip the next group of three. Thomas is upset, James is stunned with his arms flying out in disbelief. Philip looks like he’s asking for an explanation. 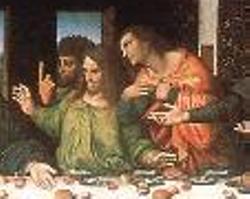 • Matthew, Jude Thaddeus and Simon the Zealot are the last group of three. Jude and Matthew are turned to Simon looking for answers. 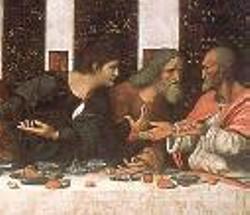 So now we ask, in Leonardo Da Vinci The Last Supper how do we really know who is seated where? We didn’t for a very long time, but now we can unravel this mystery and understand some of the code!

There all kinds of neat stuff in there. Like scuba diving and snorkeling inventions, Para-sailing and many other cool stuff that he thought about and made notes on!

But I get off track, so back to our painting! The whole scene is revolving around Jesus’ prediction of betrayal.

Leonardo creates a very dramatic and realistic scene by having Judas in shadow (the bad guy). He also creates an engaging means to explain why Judas takes the bread at the same time as Jesus.

Judas is far left in the below photo and looking back at Jesus. 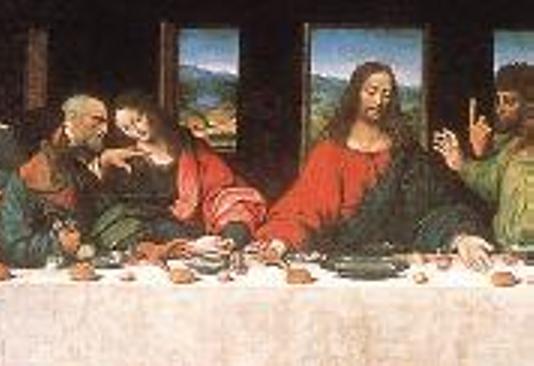 Jesus is shown saying this to Thomas and James to his left, who react in horror as Jesus points with his left hand to a piece of bread in front of them.

Judas, being distracted by the conversation between John and Peter, is also reaching for a piece of bread while at the same time, Jesus is reaching for the same piece with his right hand.

Some Bible translations say “dip his hand with me”, other say “sop bread with me”, but the main point is he (Judas) does something with Jesus in plain view of the rest of the disciples, and none take notice enough to get up and stomp him!

Didn't I tell you I'd give you one of the most intriguing secrets yet!

Now tell me, did any of you know that bit of "code" about this painting?

Leonardo has answered a question that been in my mind since I was a young lad trying to understand why the other Apostles didn’t see this and commence to break out a can of whoop a**.

Another interesting point, all angles and lighting draw attention to Jesus, whose head is located at the vanishing point of the painting. Now this was some major pre-planning on Leonardo’s part.

And finally, about that number 3 I mentioned earlier. This is believed to reference the Holy Trinity.  Groupings of 3 Apostles,  the 3 windows behind Jesus, 3 sides of a triangle that shapes Jesus’ figure and outstretched arms, all are telling you there is something important about that number three!

So now that you know all this incredible stuff, you can brag to your friends the next time you come across a copy or reference of the worlds 2nd most famous paintings!

Did you know that there are only 17 Leonardo Da Vinci paintings that we think he created?


Unfortunately, if you live in America, you gotta be able to travel to see any of them, and right now, there is only one here in the US!

Click below here to find out which of the 17 paintings this is, and where you can find it!